A Womb Tattoo, or Inmon 淫紋 (lit "lewd crest" or "sexual demon tattoo"), is a tattooed crest or magical rune located on a character's crotch or lower stomach that, as a trope, indicates sexual power emanating from or being forced upon the character.

An inmon is referred to as a "womb tattoo" not only because of its location being just above the womb, but because its design is reminiscent of and intended to evoke the shape of a womb. Designs can range from simple hearts or circular silhouettes that are stylized to represent the shape of a womb, to intricate patterns that not only represent the image of a womb but may also include the vaginal canal, Fallopian tubes and ovaries. 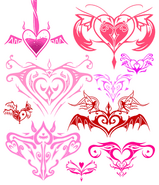 Retrieved from "https://dailylifewithamonstergirl.fandom.com/wiki/Womb_Tattoo?oldid=61007"
Community content is available under CC-BY-SA unless otherwise noted.