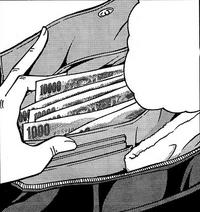 The Japanese Yen (円, 圓, ¥) is the official currency of Japan.

After obtaining minting machinery from Hong Kong, the Japanese Meiji government decided to adopt a silver dollar coinage under the name of "yen" on May 10, 1871. The yen replaced Tokugawa coinage, a complex monetary system of the Edo period based on the Mon.

Retrieved from "https://dailylifewithamonstergirl.fandom.com/wiki/Yen?oldid=15618"
Community content is available under CC-BY-SA unless otherwise noted.