Yukio is a Yuki-onna (雪女, lit. "Snow Woman") who works as the Okami (proprieter) of the Sno Ball Hot Spring Resort, an onsen resort catering to various Liminals.

Yukio, as befitting for her name and race, is a tall, slender, elegant woman with pale white skin and long, pale hair reaching her knees. Her eyes distinctively lack pupils, adding to her icy design. Her body temperature runs around 0°C[1].

Her hair is done up using a hairclip created from her own ice, resembling a snowflake that changes everyday due to her cold aura, and wears a kimono adorned with snowflakes. The obi sash has a hexagon pattern, which also harkens to the hexagon shape of snowflakes. She tends to wear it somewhat loose, exposing her large breasts slightly. In order to tolerate the high temperatures of the hot springs she sometimes also wears a special environmental suit.

Yukio, as expected of a race associated with the cold, is very emotionally distant, thus making it difficult for her to express herself openly and easy for others to find her intimidating. While polite, she can come off as standoffish and sullen. When talking about the young heir to the hot springs she runs she shows genuine affection and unconsciously grins. But it's also shown if her emotions run wild she has a tendency to lose control of her ability to control ice.[2]

At some point, Yukio wanted to join the exchange program. While she was waiting in line for an interview, a Killer Bee got impatient and tried to fly to the front of the line.[4]

Yukio is the proprietor of a hot springs resort constructed around attracting Liminal patrons. However, due to her cold demeanor and the lack of Liminal visitors she has had few customers thus Ms. Smith sends Kurusu and his homestay guests to her inn in order to test the facilities.

After the group partakes in the facilities (the hot springs actually being mixed bathing) Kurusu goes into the outdoor bath, or rotenburo, to relax on his own while the others have dinner. However, he already finds Yukio there, explaining that she's been building a resistance to high temperatures so she can run the inn better. She laments her lack of guests, explaining that she started her homestay at the hot springs and became extremely close to the young heir who she's clearly wanting to marry, the young man having built a special bath for her due to her physiology. She thus came upon the idea of refurbishing the resort so it could cater to Liminals. She partly blames herself, saying she can't smile like he does, though Kurusu notes she was grinning unconsciously when thinking of her beloved young master.

However, this caused Yukio to lose control of her composure and nearly freeze Kurusu. Embarrassed beyond belief at her actions, she claims she'll shut her doors but she is convinced to keep her inn open, the resort hosting special events where Liminal guests and prospective homestay hosts can meet. She also learned how to actively smile, making a huge difference in how she comes across to others.[2]

Afterwards, she forced the guests to write a report about their experiences in the inn.[3] 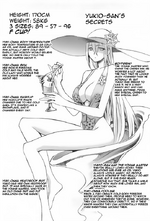 A Yuki-onna (雪女) is a psudeohuman that appears in Japanese folklore as a snow spirit of inhuman beauty that appears before travelers trapped in snowstorms with the purpose of killing them.

While the Yuki-onna race is not inherently malevolent, their stoic demeanor and their natural environment being hazardous to humans, may have given rise to myths that they intentionally cause deaths.

While possessing elemental control over ice and snow, Yuki-onna can not live in high temperate environments without assistance.

Retrieved from "https://dailylifewithamonstergirl.fandom.com/wiki/Yukio?oldid=61455"
Community content is available under CC-BY-SA unless otherwise noted.