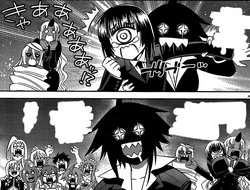 The Zombie Virus, also known as the Zombie Plague, is a highly evolved virus of unknown origins that turns its hosts/victims into Zombies.

Spread through the ingestion, injection or transfusion of blood or saliva of a zombified individual, the virus has a reasonably fast incubation time.

Information beyond speculation on how the virus manages to alter the host's body processes to such a degree that the heart and lungs no longer need to function for the host to continue to survive is still forthcoming. The virus has also, since its discovery, seemingly evolved to the point that hosts infected with the virus now fully retain the same level of cognitive ability and self awareness as they did before their infection.

Despite claims to the contrary in old folk tales, the zombie virus is fairly weak and only able to infect the body of a host that is already near death as the immune system of a body at full health will easily dispose of the viral infection.

Retrieved from "https://dailylifewithamonstergirl.fandom.com/wiki/Zombie_Virus?oldid=61108"
Community content is available under CC-BY-SA unless otherwise noted.